Killing Floor: REVIEW OF THE GAME

Killing Floor: REVIEW OF THE GAME

Killing Floor is a cooperative survival shooter that pits you and up to five other players against wave after wave of genetically modified, humanoid "specimens" that have escaped the laboratory and are rapidly overrunning England. Although they are technically not undead, and the game consistently calls them "specimens," these creatures, which travel around in hoards trying to eat people, certainly won't be offended if you mistake them for zombies. These all-but-zombies come in a variety of breeds, you can kill them with a variety of weapons, and that pretty much sums up the game. Killing Floor is satisfying in its simplicity, though the lackluster graphics are a testament to its humble beginnings as an Unreal Tournament 2004 mod. Even as a full game, it forgoes accoutrements such as story, characters, and competitive multiplayer mode, yet where zombie-killing fun is concerned, it delivers in spades. 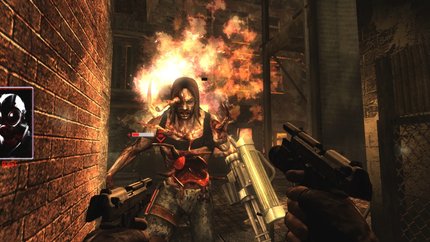 Gameplay in Killing Floor is simple. Slaughter a batch of specimens, buy new equipment from the trader, and repeat until you have a boss fight with "The Patriarch," a nasty misanthrope with a rocket launcher, a chain gun, and the ability to go invisible. No verbose exposition, lengthy cutscenes, or half-baked attempts at character and story development are arbitrarily affixed to this pure first-person-shooter experience. From the beginning, you'll love the game's satisfying gunplay. Guns look and feel real thanks to convincing ballistics and iron sights, which make aiming both important and engaging. In addition, "pray and spray" is worthless on higher difficulty levels, and ammo is often sparse, so every shot counts. To survive the intense and often claustrophobic firefights, you must coordinate with your teammates and make good use of the environment, which you can accomplish by welding shut doors to create temporary choke points, forcing the creatures to fight on your terms. Furthermore, you need to try and complete each round near the trader, who moves her shop between waves (unfortunately she won't sell you her personal teleporter) and opens for business for only less than a minute each time.

At the start of each map, you must choose one of six perks that enhance your skills in certain areas and work like classes, minus the restrictions. For instance, field medics are faster at healing themselves and their teammates, whereas commandos do more damage with the assault rifle and are better at spotting invisible enemies. Regardless of which one you're playing at the time, you'll gain experience toward leveling up your perks every time you act appropriately in-game. For example, each headshot, with the right guns, counts toward the sharpshooter perk, and you earn experience for the firebug perk by roasting enemies to a crisp. When selecting a perk, you may want to look at your teammates, because although you can play with a squad full of chainsaw-wielding berserkers, a well-rounded team will increase your chance of survival.

Using an algorithm that factors in player achievements, such as long-distance kills and headshots, Killing Floor will occasionally send everyone into slow motion, aka ZED time. (The ZED stands for the same thing as the S in Harry S. Truman: nothing.) Although it can be helpful at higher difficulties, the slow motion kicks in all too often during uninspiring moments--such as when you're trying to turn around--and can become an annoyance, particularly on beginner difficulty. Another annoying situation can come up when you're trying to find and kill the final enemy in a wave. Though they generally succeed at navigating the map, creatures can occasionally become caught on something, and nothing is more frustrating than spending several minutes trying to find the last creature only to discover that it's invisible and stuck on a log 150 meters away from the trader.

Although Killing Floor technically has both single-player and multiplayer modes, the lack of any computer teammates means that single-player is good only for playing out your Rambo V: Zombie Apocalypse fantasies. Similarly, Cooperative mode is the only gametype (sorry, competitive players), and there are only five maps, which are, to be fair, all large and nonlinear, with plenty of corners to hide in, doors to weld behind you, and settings for heroic last stands. In multiplayer, your survival depends largely on your teammates, and coordinating with them is both fun and highly advantageous. Unfortunately, ample opportunities for griefing are also available. Mischievous, or simply misguided, teammates can weld shut the door to your escape route, forcing you to choose between going out guns blazing and trying to un-weld a door while fiends chew on your innards. Even more infuriating is not being able to visit the trader because some oaf is blocking the doorway, and given that friendly fire doesn't apply, you can't even execute him or her for it. 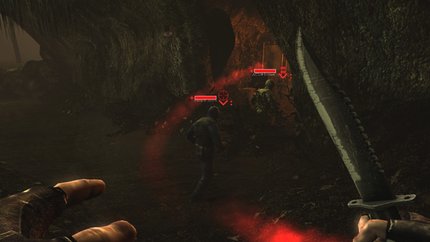 Visually, Killing Floor compares poorly with contemporary shooters, thanks to its five-year-old engine. Perhaps with this in mind, the developers went for a dark and gritty aesthetic, and when the lights are low, you won't notice how stiff the animations can be. Curiously, most of the specimens are nude, leaving you to wonder whether they rebelled against their masters due to a grossly inadequate clothing budget. The specimens come in familiar varieties, none of which look particularly great, including the zombie with the chainsaw; the zombie that goes invisible; the big, fat zombie that vomits acidic bile; and so on. The most interesting specimen is the fleshpound, a monstrosity with two meat grinders for arms and a giant yellow light on his chest that turns red when you provoke him, prompting a frenzied and deadly rampage. As far as gore is concerned, headshots provide delightful fountains of blood, and you can occasionally sever limbs, but the chainsaw feels anticlimactic. What's the point in having a chainsaw if you can't dismember zombies in a geyser of viscera that would fill the Roman Coliseum?

The sound effects are outstanding, especially for guns, and you can often use subtle sound clues to detect incoming enemies. Unfortunately, the voice acting and soundtrack don't achieve the same level of quality. To be fair, the problem with the voice acting is mostly with the script, except for the trader, who is just all-around bad. She constantly harasses you with repetitive and unappealing sexual innuendos, and the medics incessantly bleat that they are trying to heal you rather than "shag you." Meanwhile, derivative, generic metal music does little to improve the tone, though it does lend itself well to blasting zombies.

Killing Floor is permeated by a sense that you're having way more fun that you ought to be. It's absurd and crass, and yet you can't help but enjoy it. Maybe there is something inherently entertaining about gunning down hordes of zombies. Maybe the simple formula of fight, flight, or weld speaks to some primal part of the human brain. Whatever the reason, Killing Floor will have you gleefully decapitating monsters like the reincarnation of an ancient war god. It's just plain fun, and for only $20 you could do a lot worse.

Re: Killing Floor: REVIEW OF THE GAME

I was lazy to read,but at these two pictures game looks good

Re: Killing Floor: REVIEW OF THE GAME